6 people dead, 300 infected as China confirms Wuhan virus can be spread by humans

Hong Kong (CNN)Officials in China are racing to contain the spread of a new virus that has left at least six people dead and sickened more than 300, after it was confirmed the infection can spread between humans.

Wuhan, the central Chinese city where the coronavirus was first detected, announced a series of new measures Tuesday, including the cancellation of upcoming Lunar New Year celebrations, expected to attract hundreds of thousands of people.

Tour agencies have been banned from taking groups out of Wuhan and the number of thermal monitors and screening areas in public spaces will be increased. Traffic police will also conduct spot checks on private vehicles coming in and out of the city to look for live poultry or wild animals, after the virus was linked to a seafood and live animal market, according to a report by state media outlet the People’s Daily, citing Wuhan’s Municipal Health Commission.
The new measures come after Chinese President Xi Jinping ordered «resolute efforts to curb the spread» of the virus Monday.
There are now fears, however, that efforts to contain it are coming too late, hampered by a slow-moving Chinese bureaucracy which failed to put sufficient measures in place in time.
In the coming days, hundreds of millions of Chinese are expected to begin traveling across the country and overseas as the annual Lunar New Year break gets fully underway, compounding concerns of a further spike in cases.
Though infections were first detected in Wuhan in mid-December, infrared temperature screening areas were not installed in the city’s airports and stations until January 14, according to state media.
On Tuesday, China’s National Health Commission announced that it had received 291 confirmed cases of the Wuhan coronavirus, with 77 new cases reported on January 20.
The municipal health commissions of Zhejiang, Tianjin, Beijing and Shanghai also reported additional cases on Tuesday, pushing the number of infections up to 307.
Patients have been identified as having the virus in Hubei province, where Wuhan is located (270 cases), Beijing (10 cases); Guangdong province (14 cases); Shanghai (six cases); Zhejiang (five cases); and Tianjin (two cases). Suspected cases have also been reported in Yunnan, Sichuan, Guangxi and Shandong provinces.
The death toll rose to six Tuesday evening, after the Wuhan Municipal Health Commission confirmed that a 66-year-old male and a 48-year-old female died on January 20.
It added that 60 new cases were confirmed by the end of Monday in Wuhan city, where a 15-year-old is the youngest to be infected.

Beyond China, the outbreak has so far spread as far as Thailand, Japan and South Korea.Taiwan discovered the island’s first case at Taoyuan International Airport, Taiwan’s Center for Disease Control said Tuesday.
It said a woman traveling from Wuhan complained to health workers that she felt ill after stepping off her flight. She was put in isolation where further tests confirmed she had contracted the virus, the agency added.
The patient in South Korea told officials there she had developed a fever and muscle pains on Saturday and was prescribed cold medicine by a doctor in Wuhan, before being sent on her way.
Despite initial reports that the virus was unlikely to spread between humans, Chinese health authorities have now said there is «definitely human-to-human transmission.» One patient is believed to have infected as many as 14 medical staff in one hospital, suggesting the disease can be spread far more easily than previously thought.
The specter of SARS (severe acute respiratory syndrome), which infected more than 8,000 people and killed 774 in a pandemic that ripped through Asia in 2002 and 2003, has loomed large over discussion of the current virus.
During the SARS outbreak, Chinese authorities initially downplayed the dangers and censored coverage, preventing people from realizing the severity of the virus and taking action in time to stop its spread.
Zhong Nanshan, an expert with China’s National Health Commission who is investigating the Wuhan virus, told state media Monday that while it is not as serious as SARS, the number of people with the disease was «climbing» and suggested that the «death rate at the moment is not so representative.»
A study by researchers in the UK estimated that the number of infections in Wuhan is still grossly underestimated, with the real number closer to 1,700, based on the spread of the virus to other cities and countries in a relatively short period of time. 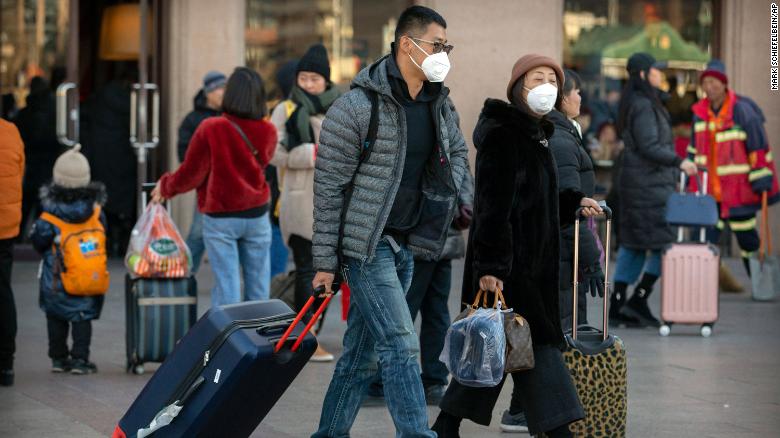 Travelers wear face masks as they walk outside of the Beijing Railway Station in Beijing, Monday, January 20, 2020.

Even before cases were detected in other countries, the efforts to contain the Wuhan coronavirus were international. Wuhan alone has connections to dozens of overseas destinations, and Beijing and Shanghai have hundreds more.
Airports across Asia have stepped up temperature screening of incoming passengers, as have several hubs in the US with connections to Wuhan, including New York, San Francisco and Los Angeles.
With all indications that the virus has a relatively slow incubation time, however, these efforts may be insufficient to stop its spread.
«You cannot absolutely prevent entry into the country of a disease like this. The incubation period is probably a week,» Australia’s chief medical officer, Brendan Murphy, said Tuesday. «It’s about identifying those with a high risk and making sure people with a high risk know about it and know how to get medical attention.»
He said that while there was no cause for immediate alarm, the true number of cases was likely far higher than currently reported and urged people to be vigilant about potential symptoms.
Australian authorities on Tuesday quarantined a man in Brisbane who had returned from Wuhan with possible symptoms of the coronavirus. He will remain in isolation until his symptoms have resolved, Queensland Health authorities said.
In the US, the National Institutes of Health is working on a vaccine for the new virus, though it will take at least a few months until the first phase of clinical trials get underway and more than a year until a vaccine might be available.
Scientists in Texas, New York and China are also at work on a vaccine, according to Peter Hotez, a vaccine scientist at Baylor College of Medicine in Houston.
«The lesson we’ve learned is coronavirus infections are serious and one of the newest and biggest global health threats,» Hotez told CNN.
On Monday, the World Health Organization (WHO) announced it would convene an emergency meeting on Wednesday to determine whether the outbreak constitutes a public health emergency of «international concern» and what recommendations should be made to help manage its spread.

bY Natalie Campisi Forbes Advisor Staff Editorial Note: We earn a commission from partner links on Forbes Advisor. Commissions do not affect our...
Por Alejo Tobón