DACA’S Uncertain Future
After his meeting with congressional
leaders on Tuesday, Trump has returned
to his «muralist» rhetoric to reach an
agreement on the Dreamers, while a
federal court issued a temporary
injunction against the end of DACA.
By Yamily Habib
Al Día (January 11, 2018) 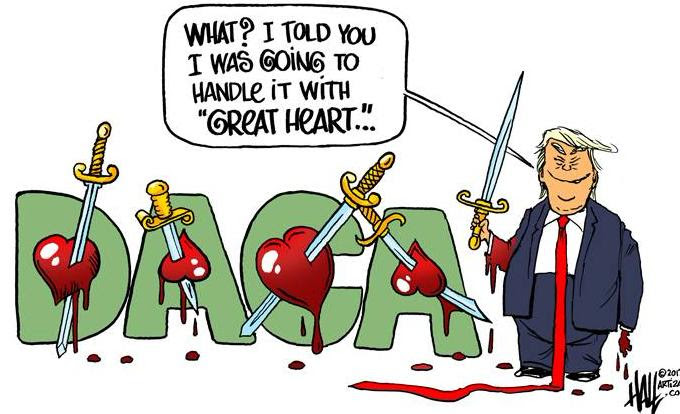 There have been few cases in which the president has reconsidered his decisions, especially when it comes to immigration.
But from the beginning, Trump has considered the topic of Dreamers a sensitive issue. However, that didn’t stop him from ending the Deferred Action for Childhood Arrivals (DACA) program, putting Congress between the rock and the wall to achieve a solution for more than 800,000 young people that have made the United States their country for as long as they can remember.
We cannot but agree with Angelo Falcón (columnist of the National Institute for Latino Policy, in that this is «the second season of the White House television reality».
Despite the media coverage of the matter, the reality is one: millions of immigrants are suffering from the so-called «reign of terror» of Donald Trump, feeling persecuted, stigmatized and cornered in their own country. According to Falcón, these measures have meant, «fewer immigrants reporting crimes and specific sectors of the economy, especially agriculture, seeing labor shortages.»
Between the end of the DACA and the suspension of the Temporary Protection Status (TPS) to several citizens from Central America, uncertainty is the order of the day.
National surveys have determined that 73% of Americans support the restoration of DACA, while 60% oppose the construction of a wall on the border with Mexico. These results of popular opinion make more difficult a legislative decision that includes the will of the people and the whims of the president.
Despite the Democrats’ campaign for a «clean» DACA bill (that is, without negotiable stratagems), Republicans insist that it be directly connected to an increase in border security and drug interdiction, while the president adds to the discussion his longed-for wall.
With a Republican majority in both houses, achieving a «clean» bill is almost impossible. In the same way, the juxtaposition of a solution to the dreamers with an increase in the border security budget is inconsistent, considering that at this moment the United States already has spent 13.6 billion dollars in migratory security, with 20,000 patrol agents which have led to a historical low in border crossings. This seems to imply that an increase in the budget will only lead to other measures within the territory, such as the one we saw unfold last Wednesday in the national raid on 7-Eleven establishments.
In view of the failed optimism to reach an agreement between both parties and the president himself, measures like that of Judge William Alsup of California – who issued a temporary relief on Wednesday that keeps the program «while deciding the measures after its elimination»- allow to contain (when not, resist) the chain of legal vacuums that endanger the stability and destiny of so many immigrants.
According to the New York Times (link is external), Alsup’s decision allows DACA beneficiaries to continue applying for the renewal of their permit, contrary to that stipulated by the Trump Administration.
For the Mexican Consul in San Antonio, Reyna Torres Mendivil (link is external), this step would be «fundamental, since it comes from the Judicial Branch». Mendivil said that this gesture would be a sign of «a greater consensus on the benefits left by dreamers to the United States.»
«There is a statistic that Texas would lose two thousand teachers if DACA ends, this can be very serious, it could affect the community in general,» said the consul. «We are ready to take advantage of this measure. We know that dreamers want to stay.»