How Latinos Defeated the Republicans the Last Time

From claiming that Mexicans were rapists and criminals to his pitiful response to Hurricane Maria in Puerto Rico, Donald Trump is arguably the most anti-Latino president in American history. What makes him particularly dangerous is that in addition to occupying the Oval Office, his party also holds majorities in the House and Senate, as well as in the Supreme Court.
The last time Republicans controlled every branch of the federal government was in the year 2006. During this congressional session, the GOP tried to make into law one of the most nativist pieces of legislation in American history, the «Border Protection, Anti-terrorism andIllegal Immigration Control Act,» more popularly known as H.R. 4437 or the «Sensenbrenner Bill.» The bill sought to turn all undocumented immigrants into felons and, among other punitive provisions (e.g. increasing deportations and border militarization), it also tried to penalize anyone who associated with «people without papers» by punishing them with thousands of dollars in fines and even incarceration. This would have potentially criminalized everyone from teachers, priests and social workers, to employers, unions and even the friends and family members of undocumented immigrants. 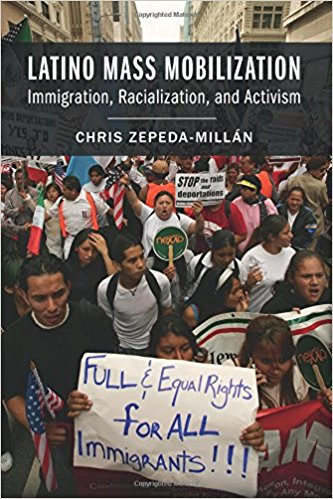 Yet despite having a firm grip on the federal government, why did H.R. 4437 fail to become law? My new book, Latino Mass Mobilization: Immigration, Racialization, and Activism(Cambridge University Press, 2017) provides some answers.
In the spring of 2006, about five million people across the United States-the vast majority of who were Latinos-participated the most extensive series of civil rights demonstrations in American history and the biggest immigrant rights rally the world has ever witnessed. This wave of activism captured international attention with its collection of massive marches, school walkouts, hunger strikes, boycotts, and candlelight prayer vigils.
In researching the national protest wave as well in-depth case studies in the West Coast, East Coast, and the Southern United States, I found that racialized policy threats against undocumented immigrants can provoke a political backlash. This backlash was – on the streets and at the ballot box – from both «people without papers» and their electorally armed Latino citizen family and fellow community members. Highlighting how immigrants and their allies utilized neighborhood resources, ethnic media, and multi-racial coalitions to organize the unprecedented groundswell of protests, my results show how the immigrant rights movement helped stop a draconian nativist bill from becoming law (H.R. 4437) and played a crucialrole in the 2008 Presidential Election.
In Latino Mass Mobilization, I illustrate how previous research on American racial politics, immigration, and social movements was challenged by the emergence of the historical series of large-scale actions. Depending on the type of policy threat and the degree to which they feel under attack, the book shows how Latino activists can rouse racialized immigrants and their families to participation in political activism in response to nativist legislation. More specifically, I contend that the multiple dimensions-the source, scope, timing, and visibility-of H.R. 4437 triggered feelings of linked fate and racial group consciousness amongst millions of Latinos, in turn making them more responsive to calls for mass mobilization. As a result, not only did the protests help stop the Sensenbrenner Bill from becoming law, but through strategically targeted campaigns activists also dramatically increased the number of Latinos and immigrants who naturalized, registered, and voted in the 2008 presidential race.
Today we know that the Hilary Clinton campaign did an abysmal job of reaching out to and mobilizing Latino voters during her 2016 campaign. We also know that racist white voters in the Midwest gave Trump the keys to the White House and that since then Latinos of all citizenship statuses have been under attack. Fortunately, the historic 2006 protest wave provides some valuable lessons about how the combination of activism, naturalization, voter registration, and electoral mobilization can stop Republicans at the national level.
This multi-pronged strategy was used in Arizona to oust the infamous Sheriff Joe Arpaio and can be utilized again in key presidential election states like Florida and Arizona, who combined have more electoral college votes than the formerly-blue Midwestern states that tipped the last election in favor of Trump. As I contend in the book, the fact that 93% of Latino youth are born in the U.S. and over 800,000 turns 18 each year and become eligible to vote, means that Latinos will undoubtedly be a political force to be reckoned with. If funders and the Democratic Party help supply the resources activists need to politically organize and electorally mobilize their communities, Latinos can create an epic change in American politics for years to come.
Chris Zepeda-Millán is an Assistant Professor of Comparative Ethnic Studies, Chicano/Latino Studies at the University of California-Berkeley, and is the Faculty Chair of UC Berkeley’s Center for Research on Social Change. He is the author of «Latino Mass Mobilization: Immigration, Racialization, and Activism,» recently published by Cambridge University Press. He can be reached at czm@berkeley.edu.