A Discussion on Racism
Within the Hispanic and
Latino Community
By Gershon Harrell
Kentwired.com (February 23, 2018) 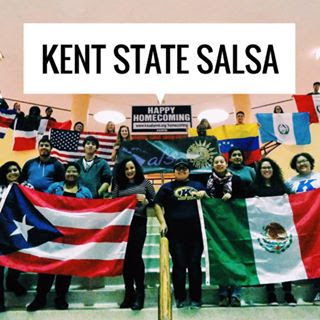 KENT, OHIO — «Basically, we want to mainly get the conversation going,» said Liza Henriquez, senior English major and president of SALSA (Spanish and Latino Student Association at Kent State University). «I think we want them to do more of the talking, that’s what we’re hinting towards. We want to know what’s going on in the community, stuff we’re not aware of so we can try and help people.»
Within the Kent area, SALSA has experienced their fair share of racism.
In the past, the organization faced discriminatory and racist remarks as they marched in the 2016 Homecoming parade.
Vice President Aylin Chagolla said nothing was done about the situation because Kent has no rule when it comes to controversial speech or hate speech.
«I get scared to speak Spanish out in public by myself,» Chagolla said. «Or like even in the bathrooms. I hadn’t realized it, but I put my music on, it’s usually in Spanish so when I come out the bathroom, it’s like, is someone going to say something to me?»
Henriquez said one of the hardest things with SALSA is trying to refrain from being too political. She recalled a time when they collabed with Black United Students on the «ban the wall» protest.
«I know that there was a certain organization on campus, but they were counter protesting us,» Henriquez said. «They were basically being like… ‘You need to leave this country if you’re an immigrant’.»
The group discussed eight habits seen and institutionalized within the Latino community. Some of the habits included calling people with darker skin tones ‘moreno’ or negrito’ or how racism can be denied.

During the discussion they played a video from «Love and Hip Hop Miami» of Amara La Negra, an Afro Latina woman. The video showed how culturally biased people can be toward Latinos and Latinos with African ancestry in the media.

Despite the discrimination, SALSA focuses on getting students the resources they need and giving students a safe space where they can identify with others they identify with.
«We really want to know what the community wants from us,» Henriquez said. «And, like, actually make changes in our campus.»
Gershon Harrell is the diversity reporter. Contact him at gharrell1@kent.edu.
Facebook