Thieves are using unique methods to steal gas as prices rise. How you can protect your car

Thieves are using unique methods to steal gas as prices rise. How you can protect your car

(CNN)Mike Gross has seen a lot of theft at his family’s dealership in Neillsville, Wisconsin, over the years, including wheels, tires, cash and entire vehicles, but this was new.

A service technician was preparing to inspect a used Jeep when he discovered a gas leak. The tech put the vehicle on a hoist, and «as soon as he put it in the air, everybody could see that somebody had actually drilled a hole into the fuel tank» to steal the gas, Gross said. 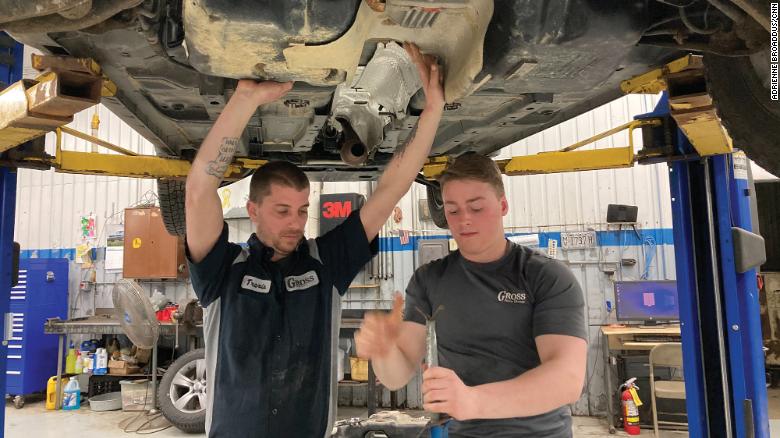 Travis Lewis, left, begins replacing the damaged gas tank at Gross Auto Group in Neillsville, Wisconsin.
Gas prices have been steadily rising over the past year as the US economy shrugged off the sluggishness of the Covid-19 pandemic. Then prices skyrocketed to record highs this month after Russia’s invasion of Urkaine. Now, similar reports of gas theft, from Georgia to Washington and states in between, are being reported regularly.
The thief at the Wisconsin dealership caused about $1,500 in damage to the Jeep for some three gallons of gas, Gross said. But thieves elsewhere are reported to have gotten away with thousands of dollars in gasoline. 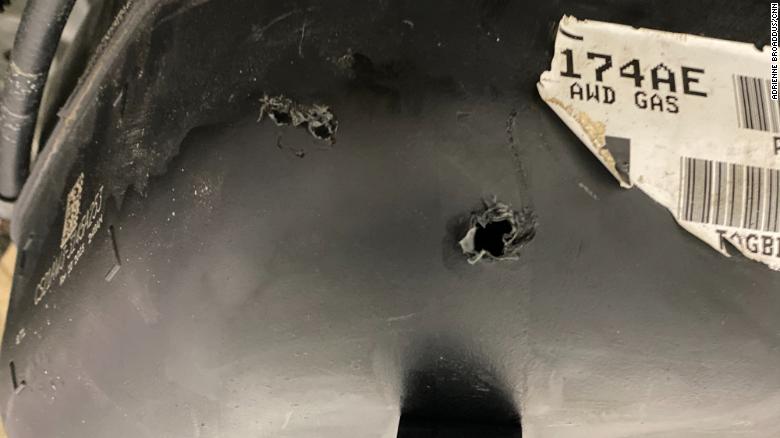 The damaged gas tank which Gross Auto Group employees discovered.
Mandeep Singh, a gas station owner in Duncanville, Texas, has had about $27,000 worth of gas stolen over the past few months. He wouldn’t reveal to CNN how the thefts are happening, because he doesn’t want others to try the same thing.
«This guy must be working for some type of gas dispenser company because he had way too much information,» Singh said, such as «how to take parts out (of the gas dispensers) and play with the system. No normal person can do it; the only person who can do that is someone who actually works for dispensers.»
Police are working on the case, and Singh has added security at his station.
«We’re hoping that there will be justice,» he said. «That’s a lot of money for us to lose.»
Thieves are coming up with novel ways to steal from gas stations. In Houston, Texas, they parked a minivan with a trap door over a station’s underground fuel tank and tapped into the tank to steal 1,000 gallons of diesel over a three-day period, said Jerry Thayil, owner of the Fuqua Express station.
Thayil is «kind of frustrated and angry,» he said. «I can’t pass this off to my customer.»
Florida investigators arrested two people last week who were allegedly using fraudulent credit/debit cards and using devices to manipulate the pump to steal gas, according to the Florida Department of Agriculture and Consumer Services.
In North Carolina last week, almost 400 gallons of gas were stolen by thieves who were able to bypass the payment system. A car pulled up to the Bizzy Bee Grocery Store and Gas Station in High Point recently, and someone appeared to use a device on the pump to get gas without paying. Then, more than 15 cars pulled up and filled their tanks over the course of 45 minutes, taking $1,600 worth of gas, according to station owner Hardik Patel.
The victims are not just business owners. Around the country, people are reporting their gas tanks had been drilled into and the gas stolen.
In a Lowe’s parking lot in Carson City, Nevada, last week, two suspects drilled into the gas tank of a parked minivan — with the victim inside and «in broad daylight,» CNN affiliate KOLO reported. In an incident where gas was stolen in Allentown, Pennsylvania, a home security camera recorded someone walking around the car with a drill and a bucket, according to CNN affiliate WPVI.
Several people around Atlanta reported having their gas tanks drilled and emptied, according to CNN affiliate WSB-TV. Atlanta police arrested a man earlier this month who was suspected of puncturing tanks and taking the gas, the department said in a release.
Drilling a hole in a gas tank is the only way to get gas out of the tank of newer cars, which have a valve that prevents gas from spilling in the case of a crash, according to AAA. The valve also prevents gas from being siphoned out of a tank the old-fashioned way.

How to protect from gas thefts

Police departments around the country have been advising drivers to take measures to protect their cars from gas theft. The Everett Police Department and the Hoquiam Police Department in Washington suggest drivers take precautionary steps, such as purchasing a locking gas cap and parking in a visible, well-lit area.
AAA has had so many inquiries about gas theft, it has put together a list of advice for avoiding it, according to Andrew Gross, public relations manager for AAA National.
Tips include parking in your garage if you have one, and when out, park in well-lit places with high foot traffic, or if possible, in a fenced-in lot or parking garage.
If you suspect your tank has been drilled — judging by the smell or puddles of gas near the tank — take your vehicle to a trusted repair facility as soon as possible, AAA advises.