Top Administration Officials Sound Alarm on «Mounting Body of Evidence» of Sweeping Harms of Marijuana Normalization on Pregnant Women and Youth
HHS Secretary: «Some state’s laws on marijuana may have changed, but the science has not, and the federal law has not.»
(Alexandria, VA) – In the most significant event on marijuana policy during the Trump Administration, today the Department of Health and Human Services issued significant warnings regarding the physical and mental health implications of marijuana commercialization. During a press conference about marijuana broadly, government officials decried the normalization of marijuana and the harmful messages Americans are receiving on the drug.
Additionally, the US Surgeon General released an advisory to the public concerning the damaging effects of marijuana use during pregnancy and on young, developing brains. In response, Smart Approaches to Marijuana (SAM) president, Dr. Kevin Sabet, released the following statement:
«Just like the famous advisory on tobacco in 1964, the significance of today’s marijuana advisory cannot be overstated. As the Surgeon General stated, ‘no amount of marijuana is safe for pregnant women or our youth.’ Big Marijuana and its promoters have consistently pushed blatant falsehoods and misinformation to suggest marijuana is safe, despite the large and growing of evidence to the contrary. Administration officials should be applauded for finally shining a light on the harms of today’s high potent marijuana.
«We know marijuana use during pregnancy can lead to a wide range of harms including low birth weight and developmental problems. Even worse, marijuana use during pregnancy has been linked to a rare, fatal developmental disorder known as anencephaly. Marijuana can have incredibly deleterious effects on young minds and it is absolutely shameful, though not surprising, that the industry would push its wares and pseudo-science on young mothers.
«Last year, 70% of dispensaries in Colorado were recommending high potency THC products to expectant mothers to ‘treat’ symptoms of morning sickness. Given the fact that these dispensaries are not staffed with medical professionals, this is greatly concerning. A large study from Canada looking at marijuana and pregnancy found negative effects well after birth: 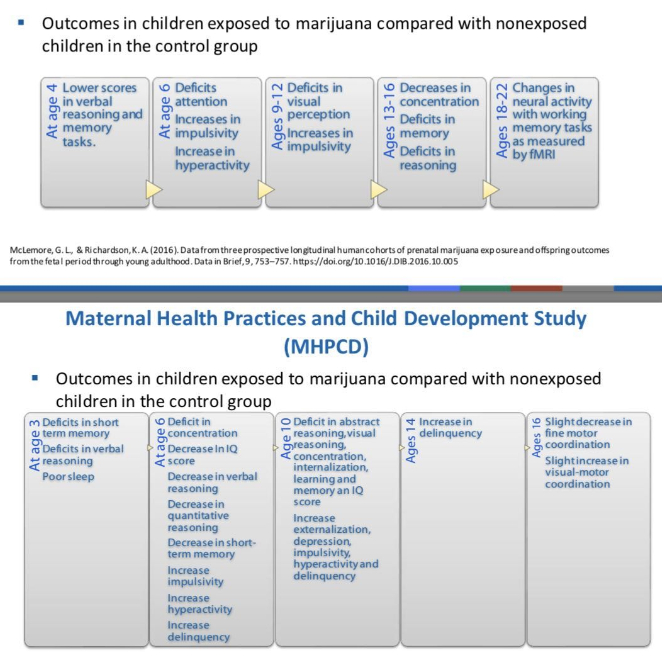 «Youth marijuana use is greatly concerning. A recent study found that one in five youth and one in 10 young adults who started using marijuana within the past 3 years have been diagnosed with a cannabis use disorder. Regular use of marijuana has been linked to IQ loss, psychosis, depression, and suicide.
«We look forward to working with HHS and other federal government officials to help raise awareness to the harmful health impacts of marijuana commercialization and use. The future of our country depends on it.»