The State’s Foreclosure Mediation Act will sunset on July 1, 2018 if no action is taken. This Act ensures that homeowners struggling with their mortgage payment can have the opportunity to meet with their lender and an independent mediator to review their options with the goal of remaining in the home and not having the property foreclosed on.

Senator Metts and Representative Messier have introduced legislation (S2270/H7385) to lift the sunset, but time is running out to act on the legislation.    As of today, the Senate is scheduled to vote on Wednesday on amended legislation.  The House version has been held for further study.

Before the law took effect, Rhode Island had one of the least restrictive foreclosure procedures in the country. Lenders were merely required to provide notice to the homeowner of their intent to initiate foreclosure, and public notice of the foreclosure in the newspaper. There was no required court involvement and no requirement that lenders meet with borrowers to explore alternatives to foreclosure.

At the time, homeowners across the State were struggling with unemployment or underemployment, and with few protections in place, many lost their homes to foreclosure.  These foreclosures had a devastating impact, not only on families who lost their homes, but also on the greater community.  Foreclosed properties often mean increased crime, declining property values and reduced quality of life for all residents.  Preventing foreclosures is the best solution for our families and our communities.

“The Foreclosure Mediation Act was borne out of the Great Recession and the housing crisis, and it has shown to be successful in keeping many Rhode Islanders in their homes. While the economy has improved and the housing market is once again strong, Rhode Island is still 13th in the country in the percentage of loans in foreclosure. Five years ago, the impetus for the passage of this bill was the foreclosure crisis but good public policy and consumer protections shouldn’t only exist during times of crisis. Their true purpose is to help stave off crises,” said Attorney General Kilmartin.

“This program helps to level the playing field against the big banks and gives Rhode Island families a voice,” said Barbara Fields, Executive Director of RIHousing.  “Since it began, this law has provided thousands of families with the chance to sit down with their bank and have their story heard. For those that take advantage of this opportunity, over 70% come to a resolution that allows them to stay in their home. We think that’s important.”

“This act has been an effective means of stemming the tide of foreclosures, and it would be senseless to allow it to sunset. Foreclosure devastates families and neighborhoods. Mediation helps people find ways they can save their homes and all that they’ve invested in them. This act has helped to stabilize families and our communities, and it absolutely should be made permanent,” said Senator. Harold M. Metts (D-Dist. 6, Providence).

“Homeowners are still facing extreme levels of hardship and are in danger of losing their homes,” said Rep. Mary Duffy Messier (D-Dist. 62, Pawtucket). “The Foreclosure Mediation Act was the result of much hard work to curb the foreclosure crisis and it has been a tremendous success. Now that the law is scheduled to sunset, it time to extend the life of a policy that has done so much good for Rhode Islanders.”

“As we continue to invest in our neighborhoods, we need to continue this important law that has prevented countless homes from falling into abandonment,” said Providence Mayor Jorge O. Elorza who spoke at the press conference. “We’ve seen the damage that foreclosures can have on a community. Let’s pass this law and help protect our neighborhoods.”

“Although the economy has significantly improved in the past few years, there are still many Rhode Islanders who are struggling to make their mortgage payments and pay for other basic life necessities,” said added Warwick Mayor Joseph Solomon. “This act offers a reasonable way forward for homeowners and financial institutions to work together to allow people to keep their homes in an affordable manner. And, I would note from a practical municipal perspective, avoiding foreclosures also helps to prevent the blight that abandoned properties can have on our neighborhoods.  The City of Warwick is pleased to support these efforts to eliminate the sunset clause of the Foreclosure Mediation Act.”

Also attending the press conference was Pawtucket Mayor Don Grebien. “The foreclosure mediation process has allowed our residents, who have worked so hard to achieve the American Dream of owning a home, to have access to a clear process, meetings with their lenders, and a pathway to staying in their homes,” said Mayor Grebien. “Allowing this law to sunset would place a significant burden on Rhode Islanders and our neighborhoods, who suffer when properties are foreclosed or abandoned.”

While not all eligible homeowners participate in the mediation process, those that do are often able to remain in their home. Since the Act’s enactment in 2013, 990 homeowners have sought to use the mediation process provided by RIHousing, the administrator of the program.  Of those that complete the process, approximately 50 percent resulted in homeowners receiving a loan workout from their mortgage provider, with another 24 percent ending without the mortgage provider receiving certification needed to proceed to foreclosure.

AG2: Attorney General Peter Kilmartin holds us a two page advertisement by Wells Fargo from a national newspaper to highlight the difference the Foreclosure Mediation Act costs the bank annually versus it’s advertising and marketing budget.

Solomon1: Warwick Mayor Joe Solomon pledged the City’s support for extending the Mortgage Foreclosure Act.  The Warwick City Council was the first in the state to pass a resolution to support Attorney General Kilmartin’s legislation.

Grebien: Mayor Don Grebien spoke about the benefits of the Foreclosure Mediation Act has on families and how that translates to stronger, healthier communities. 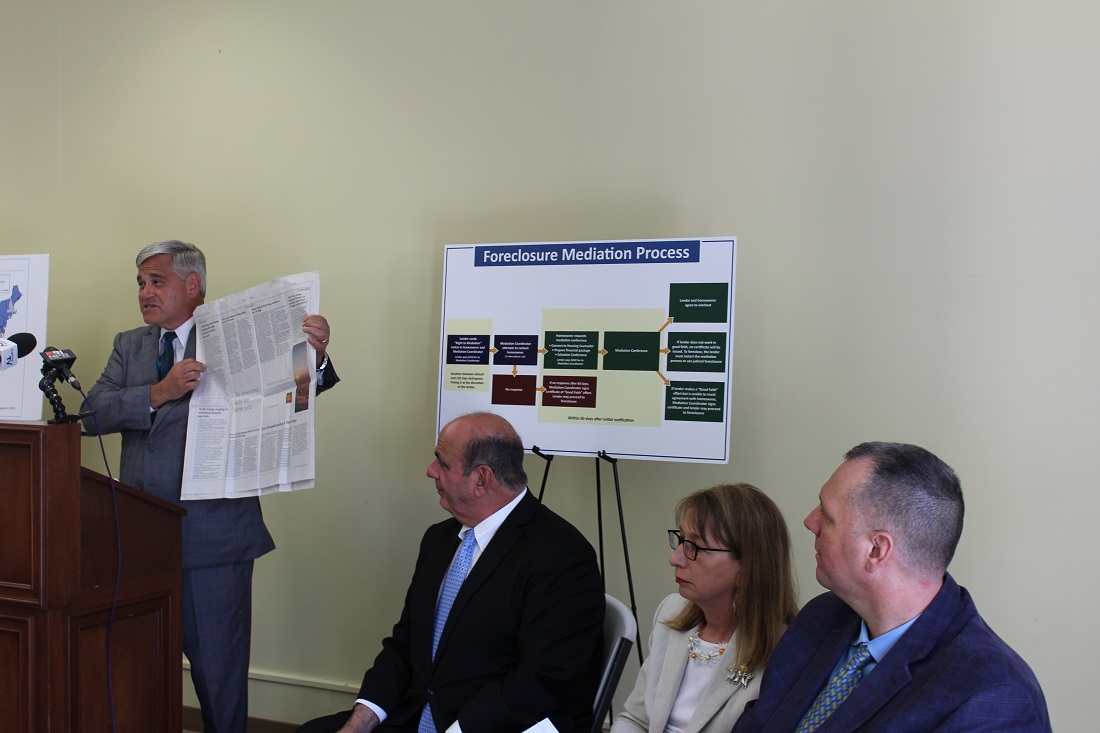 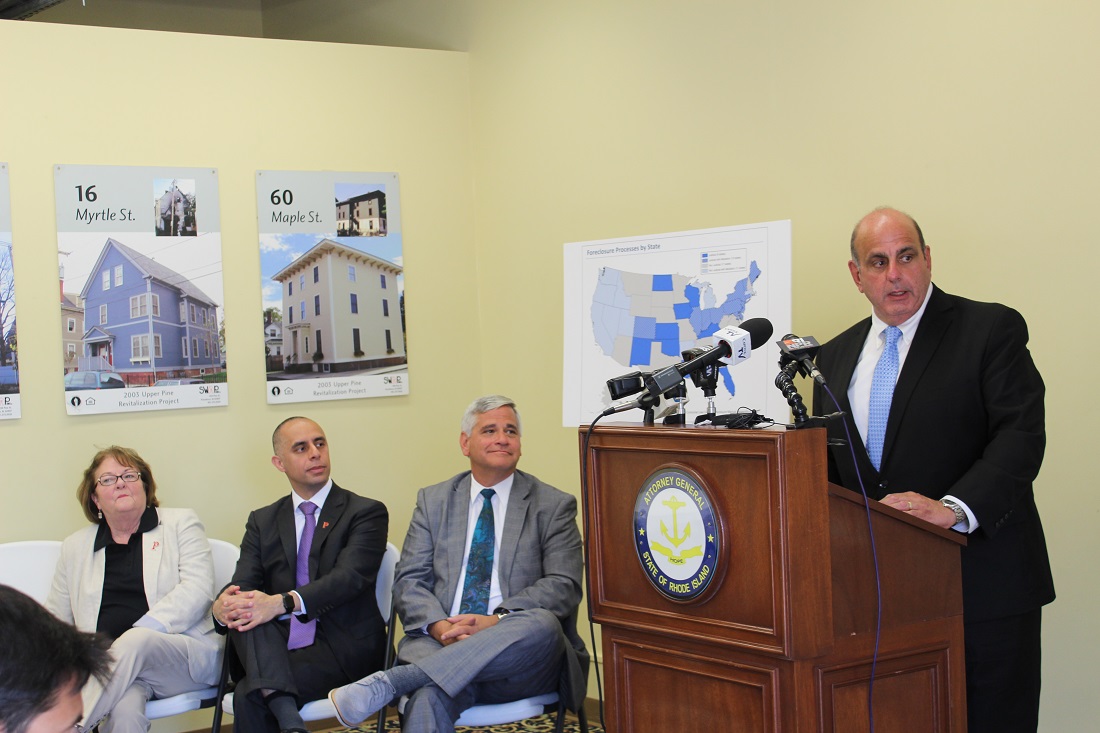 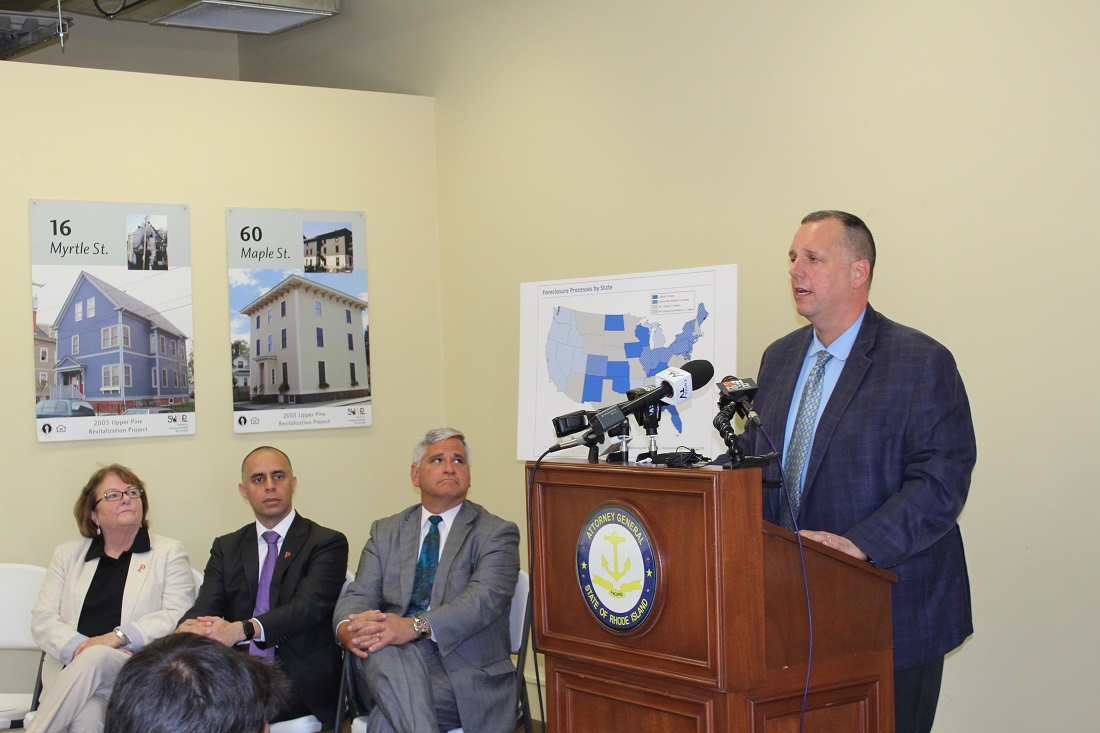 bY Natalie Campisi Forbes Advisor Staff Editorial Note: We earn a commission from partner links on Forbes Advisor. Commissions do not affect our...
Por Alejo Tobón