NiLPnote: In the policy brief below, the CUNY Dominican Studies Institute warns about an emerging trend in which the forces of gentrification in Northern Manhattan are beginning to push out the area’s Dominican population. This is a part of Manhattan where the Dominican community first became a significant economic and political force in New York City, similar to the role that East Harlem/El Barrio played for Puerto Ricans decades ago (in which one can see many parallels).
NiLP recently released Census statistics that showed that despite the overall growth of the city’s Latino population, the size of this population was declining in Brooklyn for the first time. This illustrated the impact that gentrification was playing in displacing Latinos, as one of the city’s most low income communities, in great numbers.
In their report, the Dominican Studies Institute sees the beginning of a similar displacement trend for their community in Northern Manhattan. Besides highlighting the housing affordability crisis for Latinos in this city, it also raises important political and economic implications for the Dominican community’s future.
We are glad to see the Dominican Studies Institute focusing some of its research on the developments affecting the city’s large Dominican community. We look forward to see more, including a follow-up to this policy brief down the line. We hope this report stimulates discussion on the important issues it raises not only among Dominicans but also in the broader Latino community.
—Angelo Falcón
Policy Brief:
When a Neighborhood Becomes a
Revolving Door for Dominicans:
Rising Housing Costs in Washington
Heights/Inwood and the Declining
Presence of Dominicans
By Ramona Hernández, Utku Sezgin andSarah Marrara
The NiLP Report (February 25, 2018)
For a copy of the full report, click here 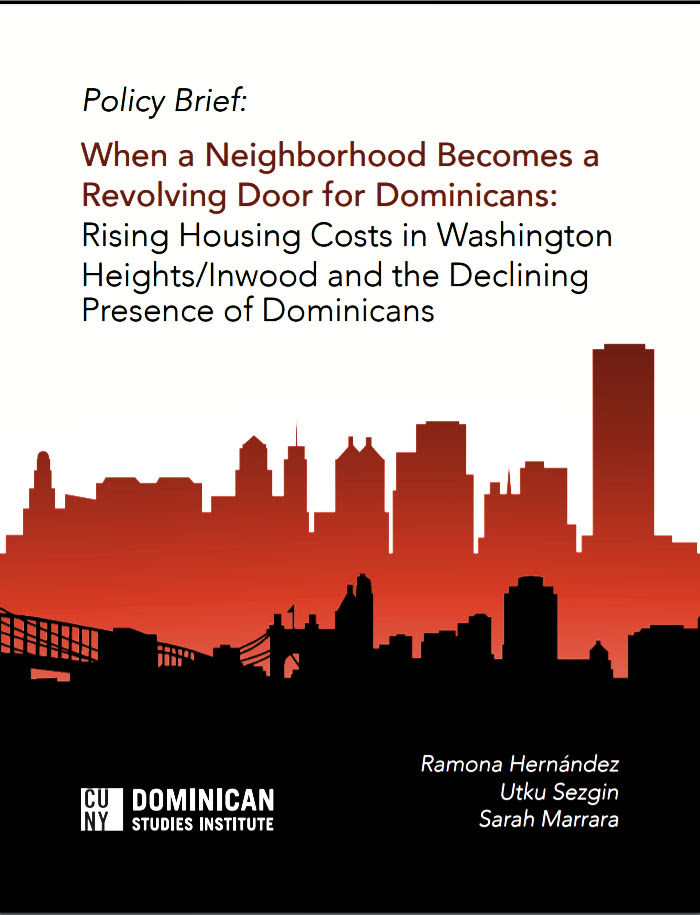 [From the report;s introduction] This is a policy brief on Dominicans, gentrification, and affordable housing, aims to draw attention to the worrying trends in Washington Heights/Inwood regarding the lack of affordable housing, skyrocketing rents, and the increasing exodus of Dominicans from Manhattan to other places, including out of the city and state, in search of cheaper housing costs. The report rings an alarm bell to enlist the support of community leaders, activists, academics, and all Dominicans to press upon policy-makers and elected officials to put into practice a plan of action that addresses both short and long-term solutions to ensure the permanency and stability of working-class and low-income Dominicans and others in the neighborhoods they have called home for a half century or more. The report outlines fast increasing rents and how the increases have affected the different groups residing in the neighborhood; it also describes increasing rent burdens for poor long-term residents, a severe lack of housing that low-income residents can afford, as well as the decline of the Dominican, working-class in Washington Heights/Inwood. 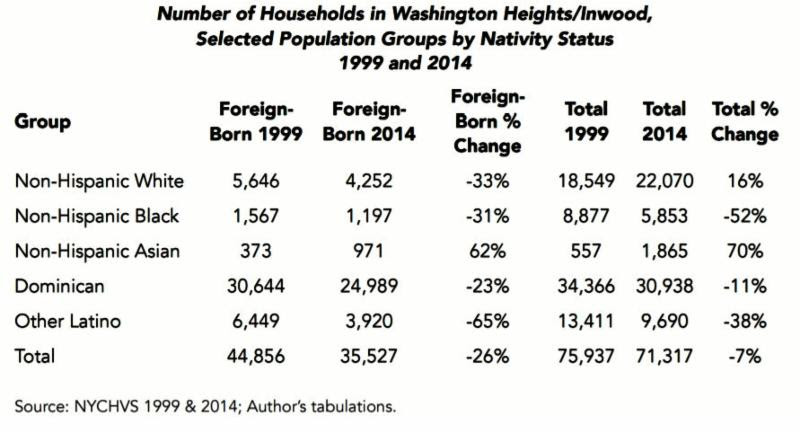 In the 1990s and the early years of the twenty first century, observers of New York City’s demography expected the seemingly inexorable increase in the number of Dominicans in the city to continue unabated into the foreseeable future. With all of the recent excitement proclaiming Dominicans the largest Latino group in New York City, and with the Dominican population in the city nearing 1 million, it is indeed easy to forget that the presence of Dominicans in New York City, and particularly in the historic Dominican ethnic enclave of Washington Heights cannot be taken for granted. This policy research brief will caution against complacency regarding the place of low-income, immigrant, and working-class individuals, including Dominicans, in New York City. The report will do so by stressing the effects of gentrification in Washington Heights/Inwood, a neighborhood that is increasingly attracting the affluent at the expense of its long-term, working class, and immigrant residents.
Gentrification, defined as the phenomenon of increased demand by young professionals for housing in a convenient, well-located neighborhood and the resulting rapid increase in rents that displaces poorer longer-term residents, is a problem all over New York City. Washington Heights/Inwood, has not been immune. According to the Furman Center, Washington Heights/Inwood is rapidly gentrifying; threatening its poor with displacement because of the escalating rents.ii
Gentrification has been a fact of life in Washington Heights/Inwood since at least the late 1990s. Following in the footsteps of similar neighborhoods that have gone through gentrification, Washington Heights/Inwood has slowly witnessed a growing population resurgence fueled by the arrival of high-income, upper-middle class newcomers. Unfortunately, the resurgence has come at the expense of long-term, poorer residents, who are having trouble paying the high rent increases and are unable to find housing that they can afford in the neighborhood.
The present study adds to the consensus about gentrification in the literature. Many New York City housing experts agree that as gentrification has taken hold of one desirable neighborhood after another, and as higher-income individuals have moved more and more into such neighborhoods, low-income families and individuals have consequently been displaced in alarming numbers from the places they had long called home.
Despite the fact that gentrification has been on the agenda of many policy-makers as a priority, currently, the process of gentrification still continues unabated. Low-income working class people who live in such neighborhoods that have become attractive and desired by the affluent are unfortunately bound to experience displacement from their homes, and if immigrants, find themselves forced to move once again.
Because Dominicans have been the poorest and the single largest ethnic, immigrant group in Washington Heights/Inwood for decades, they have been hit the hardest. Gentrification has pushed some people out and has brought other people in. As expected, these changes are transforming the character of the eighborhood. In the case of displaced Dominican families, those who leave also take with them their ultural belonging and the continuity of their historical legacy.
If the current trends continue, the displacement of people will likely worsen. It will also mean the further erasure of the neighborhood’s long-standing cultural identity. This will be a loss not only for the Dominican people, but for all New Yorkers as well.
For further information
CUNY Dominocan Studies Institute
The City College of New York
North Academic Center, Room 4/107
160 Convent Avenue
New York, NY 10031
p: 212.650.7496
f: 212.650.7498
e: dsi@ccny.cuny.edu
https://www.ccny.cuny.edu/dsi
Related
«Perspectives on Dominicans in New York City» by Ramona Hernández and Silvio Torres Saillant in Latinos in New York: Communities in Transition, 2nd Edition, edited by Sherrie Baver, Angelo Falcón and Gabriel Haslip-Viera (Notre Dame: University of Notre Dane Press, 2017), Chapter 5.