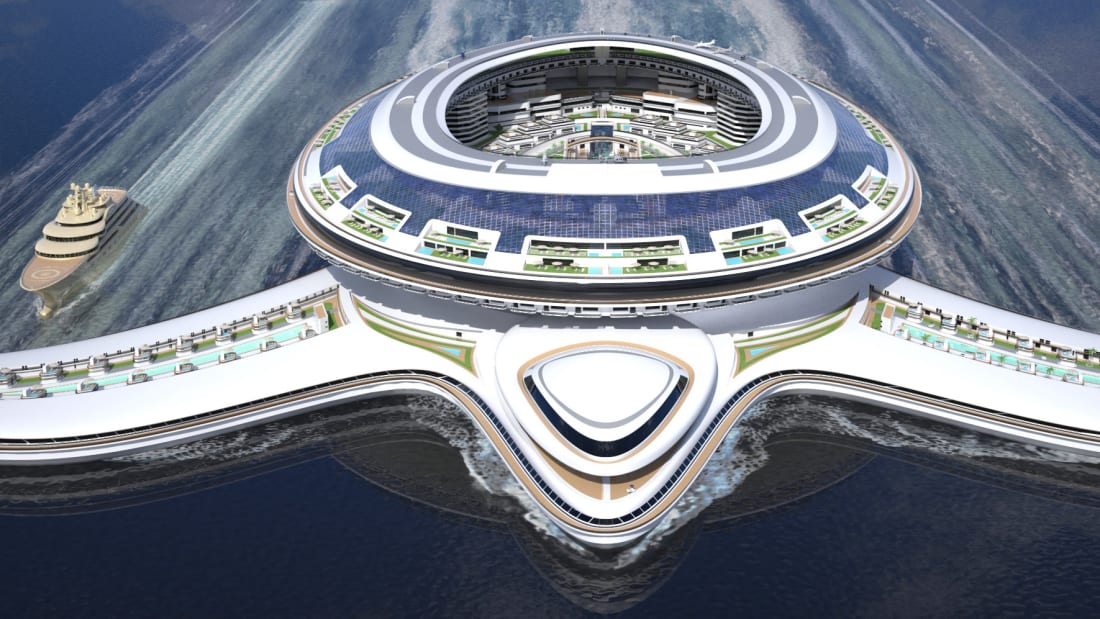 Editor’s Note — Sign up for Unlocking the World, CNN Travel’s weekly newsletter. Get news about destinations opening, inspiration for future adventures, plus the latest in aviation, food and drink, where to stay and other travel developments.
ORIGINAL NOTE: https://edition.cnn.com/travel/article/pangeos-terayacht-turtle/index.html
(CNN) — In a time of economic crisis, what could be more outré than a superyacht? Why, a terayacht of course — a name given to vessels even bigger than super, mega and gigayachts.
The latest luxury boat to hit the market is Pangeos — named after Pangea, a supercontinent that existed from 200 million to 335 million years ago. And if those seem like big numbers, wait until you hear how many dollars it’ll take to construct it: $8 billion, according to designers Lazzarini.
Little wonder it’s so expensive when this, if funded, will become the largest floating structure ever built. Looking rather like a Bond villain’s lair, it’ll sprawl 550 meters (1,800 feet) long, and 610 meters (2,000 feet) wide.
A full-on «floating city» according to Lazzarini, the yacht will have space for hotels, shopping malls, parks and even ports for smaller ships and aircraft to get guests there in style. And style there will be, given that it’s shaped like a tera-turtle.
It’d take a special place to build it, too — one that doesn’t currently exist. The designers have posited Saudi Arabia as a location. Around one square kilometer of sea would need to be dredged and a circular dam constructed before the build could commence. The designers have earmarked a space at King Abdullah Port, 81 miles north of Jeddah as the ideal location.
Divided into blocks like an actual city, Pangeos has a port and main square, off which other buildings spiral. An «upper shell» area, surrounded by garden spaces, would act as a landing spot for aircraft.
Below the living space would be 30,000 «cells» which would keep the structure afloat. The basement would be made of steel. It’d have a massive 30 meters, or 98 feet, of draft, and be able to cruise at a speed of five knots — although the «wings» would draw energy from the drag and waves breaking against the ship. The roof would have solar panels to power the yacht.
Rather than operating out of a particular port or having a set itinerary, the tera-turtle would simply cruise around, making the journey the destination. Again, perfect for a Bond villain.
Lazzarini hopes that construction could start in 2033, with a build time of eight years. Want to see it on the water? There’s a crowdfunding initiative which allows you to buy anything from a virtual entrance ticket ($16) to a VIP apartment ($169) via NFT. That’s for a virtual apartment, of course — but if you want to buy a real one, you can put that money towards a deposit for the real thing.
Now to find the rest of those $8 billion…