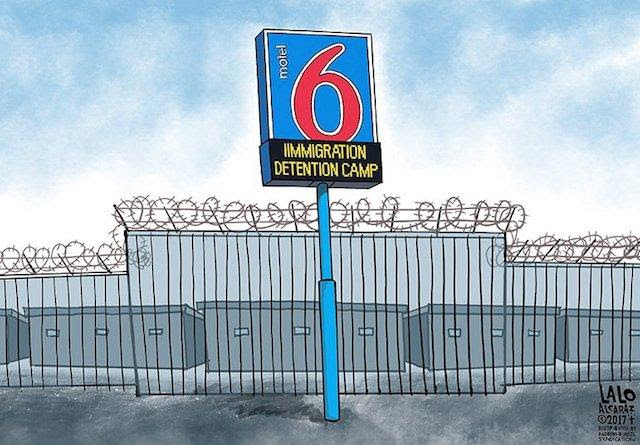 Motel 6 is again facing allegations of aiding U.S. Immigration and Customs Enforcement in its crackdown against undocumented immigrants.
Washington Attorney General Bob Ferguson accused the discount hotel chain in a lawsuit of violating state privacy and discrimination laws since 2015 by snitching to ICE agents on some 9,000 guests with «Latino-sounding names.» Disclosure of names, identification numbers, birth dates and license plates led to the detention of at least six individuals in Washington state, according to the complaint filed Wednesday in Seattle state court.
The complaint against Motel 6, acquired by the Blackstone Group in 2012, comes less than four months after the company parent G6 Hospitality dismissed similar allegations in Arizona as a «local level» practice «without the knowledge of senior management.»
Ferguson said a common «lawful enforcement acknowledgment form» used in multiple Motel 6 locations in Washington shows the practice was centrally coordinated.
G6 Hospitality directed its hotels in September to stop the behavior, company spokeswoman Raiza Rehkoff said in an emailed statement.
«In September, Motel 6 issued a directive to every one of our more than 1,400 locations, making it clear that they are prohibited from voluntarily providing daily guests lists to ICE,» she said. «Motel 6 takes this matter very seriously, and we have and will continue to fully cooperate.»
President Donald Trump campaigned on a promise to deport «bad hombres» of Latino heritage. Congress is now debating the president’s calls for faster deportations and a border wall with Mexico.
Ferguson, a Democrat, has fought against Trump’s policies, including his travel restrictions on visitors from a group of mostly Muslim nations, the repeal of net neutrality and a proposed ban on transgender troops in the military.
Motel 6 allegedly trained new employees on sharing names with ICE, instruction that never required agents to produce a warrant, according to the complaint.
In one case, Ferguson found that agents were visiting the hotel in the morning, identifying Latino targets, then returning later in the day to detain individuals. From Feb. 1 to Sept. 14, that location disclosed private information to ICE 228 times over 225 days, according to the complaint.
Motel 6 has admitted to some of the accusations, including ICE’s relationship with six of its branches in Washington, according to the filing. Rehkoff declined to comment on that claim.
The case is Washington v. Motel 6 Operating, 18-2-00283, King County Superior Court, Washington state (Seattle).