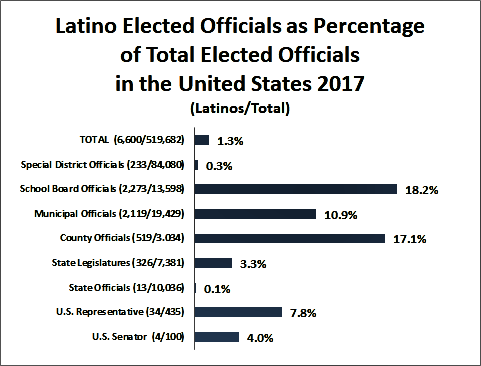 Latinos were best represented among School Board Officials (18.2 percent) and County Officials (17.1 percent). They were most poorly represented among State Officials (0.1 percent) and Special District Officials (0.3 percent).
In the US Congress, Latinos make up 7.8 percent of the House of Representatives and 4.0 percnet of the Senate.
—Angelo Falcón
Record 6,600 Latinos
Serving in Elected Office Nationwide
National Association of Latino Elected and Appointed Officials (January 16, 2018)
The NALEO Educational Fund research found that 6,600 Latinos are serving in elected office in 2017, up from 6,011 in 2013, an increase of nearly 10 percent. This was the finding of its comprehensive analysis of Latino political representation in the United States published in the 2017 National Directory of Latino Elected Officials. This is the only and most authoritative counting of Latino elected officials conducted in the United States.
This historic number includes four U.S. Senators, including the first Latina U.S. Senator, the Honorable Catherine Cortez Masto, 34 U.S. Representatives, 13 State Officials, 80 State Senators and 246 State Representatives.
The new data show significant gains in the number of Latino elected officials serving at the highest levels of office. Since 2013 the number of Latinos in Congress increased from 31 to 38, while the number in statewide office increased from eight to 13. The number of Latinos serving in state legislatures also grew, rising from 281 to 326 during this period. 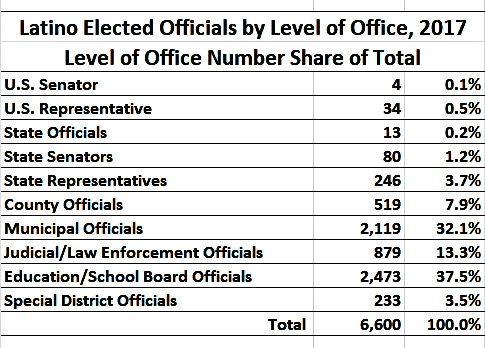 2017 also marked continued gains among Latina elected officials. Thew Directory also docuemtned that more than one of every three (36.4 percent) Latino elected officials is a Latina. Between 2013 and 2017, the number of Latinas serving in elected office grew faster than their male counterparts – increasing by 17 percent, compared to male Latinos, who increased by six percent.

Now in its thirty-third year in production, the National Directory continues to serve as a useful resource to both identify Latino representatives and to measure the civic activity of the Latino community. Additional information can be found in the 2017 National Directory of Latino Elected Officials here:http://www.naleo.org/pra_dir_2017.
About NALEO Educational Fund
The NALEO Educational Fund is the nation’s leading non-profit, non-partisan organization that facilitates the full participation of Latinos in the American political process, from citizenship to public service.
Further information
Amanda Bosquez, abosquez@naleo.org
January 16, 2018 (202) 546-2536, (361) 548-6989 (cell)
Daniel Ramirez, dramirez@naleo.org
(213) 765-9422, (805) 223-0225 (cell)