‘No more car for me’: will a $23 toll finally rid Manhattan of gridlock? 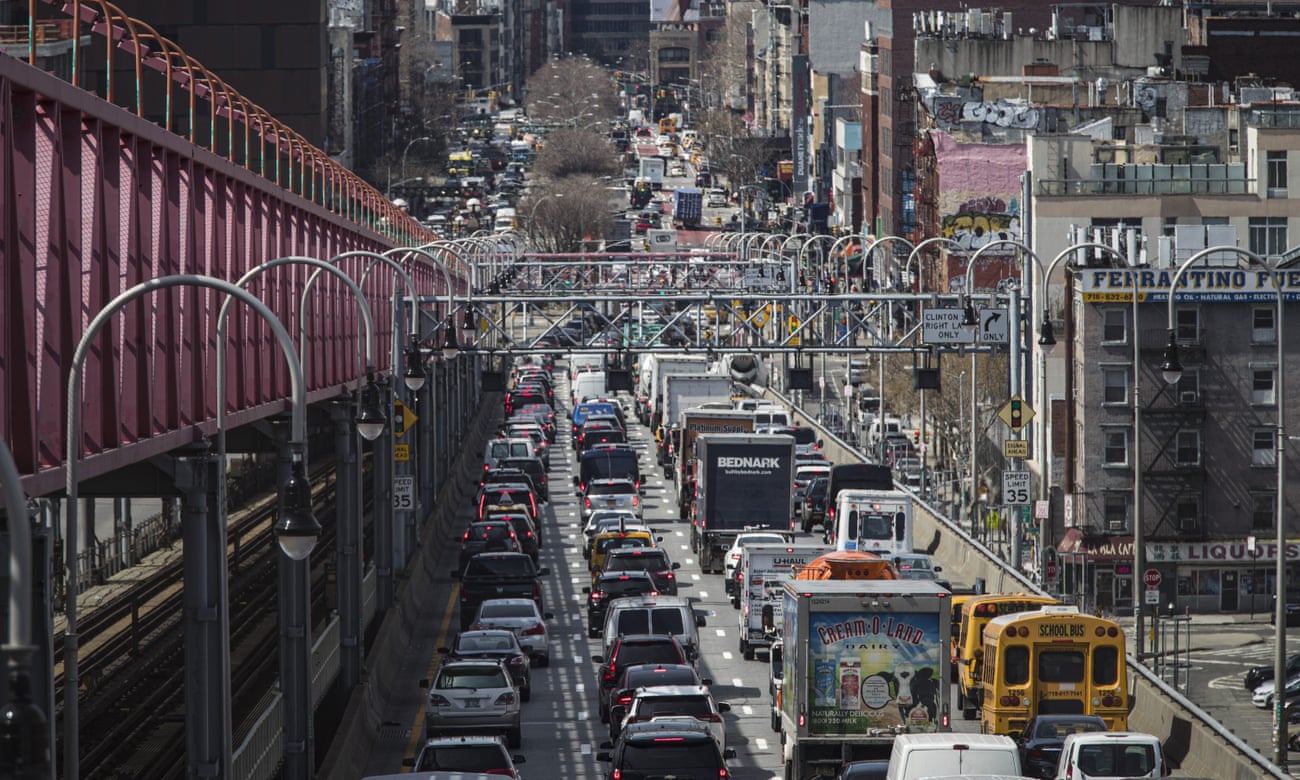 Could a moonshot policy finally rid the nation’s most congested city of its incessant, noisy, polluting traffic? Soon, over a million drivers a day could be forced to cough up as much as $23 to enter midtown and lower Manhattan – a toll that planners say will raise $15bn to fund New York public transit while cutting vehicles in the area by as much as one-fifth.

Among the cars that would be leaving the streets of Manhattan is a white Honda Accord that was parked on East Broadway in the Lower East Side on Wednesday.

“If they add even more fees, then that’s it,” said Felicita Mercado as she stepped into the vehicle. “No more car for me.”

Instead, the 77-year-old lifelong New Yorker said, she will start taking the bus.

The plan is called congestion pricing, and New York City is poised to become the first city in the United States to implement it. Similar policies have long been in place in cities including Singapore, which has had congestion pricing since 1975, and London, where a congestion charge has been in place since 2003. But in New York, a city synonymous with gridlock, the policy struggled to overcome opposition for decades before it was finally signed into law in 2019.

On Wednesday, transportation authorities released a much-awaited environmental assessment for the policy, a major milestone that explains how the plan will affect the city. “Bottom line: congestion pricing is good for the environment, good for public transit and good for New York and the region,” said the Metropolitan Transit Authority’s (MTA) chair and CEO, Janno Lieber, in a statement.

Public transportation advocates are calling it a long-awaited victory. “This is a massive deal for all New Yorkers,” said Danny Harris, the head of Transportation Alternatives, a nonprofit that has fought for the policy. “There’s not a corner of the city that isn’t negatively impacted by our car-first policies. This is a big step for not being so car-centric that reduces the number of people who drive and increases the amount of people who take other sustainable modes to get around.”

Manhattan is an island connected to its neighbors by a network of bridges, tunnels, train routes and ferries. An estimated 7.7 million people enter Manhattan’s central business district every weekday – twice the population of Los Angeles, according to the report. Of those people, just under a quarter – or 1.85 million – enter in a motor vehicle. All that traffic has slowed travel speeds to an agonizing crawl: from an average of 9.1 mph in 2010 to just 7.1 mph in 2019. That costs the average New York City driver 102 hours of lost time every year.

Meanwhile, the public trains and buses used by the majority of the city are in dire need of upgrades. Many of the MTA’s railroads and subway tracks are more than a century old and require billions of dollars in repairs. Studies have found that most of the city’s bus routes – which are especially important for the city’s lower-income residents – are excruciatingly slow and unreliable. And ridership numbers have worsened dramatically since the pandemic, amid fears of Covid and crime.

That dynamic has produced enthusiasm for congestion pricing among residents of lower Manhattan.

“There’s too many people driving in for no good reason,” said one Chinatown bike shop owner, who declined to be named. “They’re not coming in for work, they’re not coming in to do anything specific – they’re just driving because they’re lazy or they’re afraid of the subway. It just sucks that people are driving behemoths that are unnecessary and also destroying our infrastructure, which is causing cascades of other problems in the city.”

“I full-throatedly support strong congestion pricing on private cars,” said Ben Eckersley, a 31-year-old lifelong Manhattan resident who lives on the Lower East Side. “We have a public transit system that is only designed to get in and out of Manhattan from every borough. The fact that people use lower Manhattan as a pass-through location to get to New Jersey is bogus. The local pollution problems it causes, the traffic problems it causes are outrageous. We just don’t have the infrastructure for it.”

The new study offers policymakers a number of tolling scenarios, with peak-hour tolls ranging from $9 to $23 per vehicle. In some scenarios, vehicles such as taxis and transit buses and would be exempt from the toll completely, while some other vehicles would be charged the toll a maximum of once per day. In another scenario, vehicles including taxis, rideshare vehicles, trucks, and buses could be hit with the congestion charge every time they enter or re-enter the zone in a given day.

Residents of the congestion area making under $60,000 a year will be eligible for a tax credit to make up for the cost of the tolls, and emergency vehicles and vehicles carrying people with disabilities will be exempt from the tolls, according to the 2019 law.

The reward to all residents of the area should be noticeably less traffic and cleaner air. The study projects that the number of vehicles in the area each day will decrease between 15.4 to 19.9 percent. Harmful airborne PM2.5 and PM10 particles, which have been shown to cause cancer, would be reduced by over 11 percent.

New York’s policy does not go as far as London’s, where drivers who enter a designated “ultra low emissions zone” must pay a fee if their car doesn’t meet fuel efficiency standards. As of last year, that zone covers most of the British capital.

“The truth is, people have never had to pay the actual cost of driving because it’s been so incredibly subsidized,” he said, citing policies like the city’s millions of free street parking spots.

But the toll’s success also depends on whether the city can fast-track infrastructure for alternatives to driving, such as bikeshare docks, protected bike lanes and bus-only lanes, before the toll is formally implemented, he said. Congestion pricing shouldn’t be about “taking cars away from people”, he said, but about “providing options for you to get around”.

“If you live in a community where you’re forced into a car, forced into car payments, and forced into wasting much of your life in traffic, it means your city and the car industry have continued to fail you. This is about giving people freedom from that.”

… as you’re joining us today from Colombia, we have a small favour to ask. Tens of millions have placed their trust in the Guardian’s fearless journalism since we started publishing 200 years ago, turning to us in moments of crisis, uncertainty, solidarity and hope. More than 1.5 million supporters, from 180 countries, now power us financially – keeping us open to all, and fiercely independent.

Unlike many others, the Guardian has no shareholders and no billionaire owner. Just the determination and passion to deliver high-impact global reporting, always free from commercial or political influence. Reporting like this is vital for democracy, for fairness and to demand better from the powerful.

And we provide all this for free, for everyone to read. We do this because we believe in information equality. Greater numbers of people can keep track of the events shaping our world, understand their impact on people and communities, and become inspired to take meaningful action. Millions can benefit from open access to quality, truthful news, regardless of their ability to pay for it.

Every contribution, however big or small, powers our journalism and sustains our future. Support the Guardian from as little as $1 – it only takes a minute. If you can, please consider supporting us with a regular amount each month. Thank you.