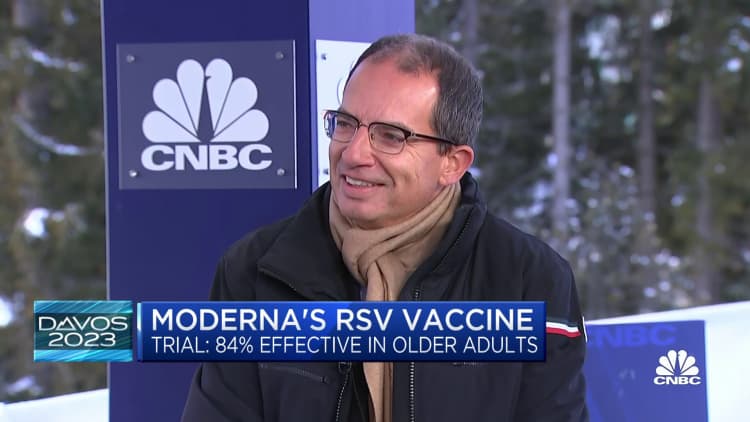 The Covid vaccine is here to stay after a development process that broke the record books at both Moderna and Pfizer, but a new golden age ofvaccines may only be at its beginning.

Both companies have released results from RSV vaccine trials with efficacy results strong enough to expect expedited approval from the FDA. The latest was Moderna, which on Tuesday night share results from its RSV vaccine trial of over 37,000 individuals in 22 countries, effective at preventing lower respiratory tract disease.

Pfizer, whose RSV vaccine is focused on pregnant women able to transfer the antibodies to the fetus and offer protection for the first six months of life, previously released efficacy results of approximately 82% for the first 90 days of a child’s life.

The companies — which have been involved in litigation brought by Moderna alleging mRNA patent infringement, a claim Pfizer disputes — are both expecting to be in the FDA approval process for their RSV vaccines to relatively quickly.

Pfizer’s vaccine is already in the FDA approval process and Moderna CEO Stéphane Bancel told CNBC from Davos on Wednesday that it will be filing for FDA approval for its vaccine soon — it even had a plan in place for top executives to be ready to submit over the holidays if needed.

Pfizer CEO Albert Bourla downplayed the legal issues on Wednesday, offering his congratulations to Moderna and telling CNBC, it was “good news because we need to have options.”

He said while you cannot make direct comparisons between the two trials and he had not seen full safety data from Moderna, the efficacy looked to be “at same range as our efficacy, more or less,” and he expected if all the data checked out, his vaccine competitor would proceed soon. Pfizer, he said, already has priority review in the FDA approval process because of the data set’s strength and because the disease does not have vaccine.

“I’m sure if the Moderna data is as expected, it will be approved,” Bourla said.

The Moderna vaccine was 83.7% effective in preventing RSV with two or more symptoms, in people ages 60 and older, and it was 82.4% effective at preventing lower respiratory tract disease with three or more symptoms. No safety concerns were identified during the clinical trial, according to Moderna, which has yet to publish safety and efficacy data from the trial in a peer-reviewed journal, but plans to do so. Bancel told CNBC that common side effects of this type of virus vaccine, such as fever, were only slightly higher in those receiving the RSV shot in the trial (4%) versus those in the control group getting a placebo (2.8%).

RSV has never had a vaccine and cases have been rising

The RSV successes come after a particularly bad RSV season in the U.S. last fall among children and older adults. It’s also a virus that previously received little attention from R&D labs. That caught the attention of Moderna, which for years has been working on its mRNA technology.

“Pre-covid, in 2019, if you look at respiratory viruses that drove hospitalizations in the U.S. and the world, it was No. 2, and not well very known,” Bancel told CNBC from Davos. “No one really talked about it. … As we looked at the impact on the world  and hospitalizations and deaths, we said we need to find a solution.”

The Covid vaccines shattered records for development and approval timelines.

“We started phase one in January 2021, just after the Covid vaccine was approved and here we are, just 24 months after announcing phase 3 positive data,” Bancel said. “For traditional technology, it would have taken 6, 7, 8 years.”

Bancel noted that one advantage the mRNA platform offers is the lack of any capacity constraint in production of the new vaccine. “All the products use the same manufacturing process. We can use the same people, the same equipment and raw materials as the Covid vaccine.”

The RSV approval process is just one part of a widening vaccine industry for these two companies. Bourla told CNBC that Covid waves “will be coming and we will live with it, with boosters every year “the likely scenario.”

The vaccines being developed will include not only a Covid and seasonal flu combination shot in one dose but also potentially RSV combined with other vaccines in one dose, the companies have said.

At Pfizer, the speed of vaccine Covid development is informing a new way of thinking, including an unprecedented pipeline of new products expected to be introduced over the next 18 months, 19 total, including five vaccines for the flu, RSV, pentavalent meningococcal disease, and later in 2024 and 2025, vaccines for shingles and Lyme disease, as well as combination doses for Covid, the flu and RSV, “all of that,” Bourla said. “I don’t think there has ever been a company that managed 19 launches in 18 months,” he said.

But the vaccine breakthroughs also come at a moment in time when Wall Street is uncertain about the short-term business potential, a “Covid reset” when it comes to the vaccines developed by these companies. Pfizer’s stock has faced pressure and downgrades from Wall Street analysts. Moderna’s shares reached a height of over $400 during Covid, but are now worth half of that value, though they rallied on the RSV news this week.

“This is a transition year,” Bourla said, as Covid shots move from a government funded business to a commercial business. He said as this takes place the existing stock of Covid shots needs to be absorbed, meaning many vaccine lots sold in 2022 will be administered in 2023. But Bourla expects overall utilization levels to be similar year over year, and in 2024, citing a U.S. market in the range of 100 million booster doses used in 2022. “We expect it will be more or less the same,” he said, split between Pfizer and Moderna.

The companies continue to work on the Covid virus in the event a new strain proves capable of posing a problem to the current vaccines. “Every strain is treated as suspicious and we start working on it to see if it can overcome the vaccine,” Bourla said. He said Pfizer is currently working on the XBB1.5 strain of Covid which originated in New York and is now spreading around the U.S.

He said differences around the world remain stark, such as countries including Portugal, where there has been little if any political debate about the vaccine campaigns.

“If you look at data, the clinical data run by independent data safety monitoring boards [the FDA in the U.S. and EMA in Europe] they run the entire analyses themselves and I think the science was very strong. I know the timelines were very surprising,” Bancel said. “I think governments and industry have to work together to figure out how to educate people and share real-world data.”

Bourla said of a recent CDC review of a potential link between its Covid vaccine targeting the omicron variant and stroke, that the agency was being transparent about a data finding but that in the end, it was not an issue.

“What the CDC said was it saw a small signal in a database and discovered nothing,” and he added that Pfizer also did its own investigation in Israel, the U.S. and Europe for transparency. “Billions of doses and a single signal,” he said.

After its review the CDC called the potential link “very unlikely.” It said the safety signal has not been detected in four separate safety databases, indicating that a true health risk is unlikely, though the review is ongoing and CDC officials will present their findings before the Food and Drug Administration’s independent vaccine experts later this month.