Inside Telemundo’s Battle with
Univision for American Hispanics
Spanish-language broadcaster owned
by Comcast has rolled out edgy shows
and bigger-budget productions to appeal
to a younger, bilingual audience
By Keach Hagey   keach.hagey@wsj.com
Wall Street Journal (March 16, 2018)
Five years ago, Telemundo had less than half the audience of rival Univision and was headquartered in a former shoe warehouse in a neighborhood that flooded each time a hurricane blew through Miami.
Today, the Spanish-language broadcaster owned by Comcast Corp. CMCSA +1.18% is nipping at long-dominant Univision’s heels in the ratings, consistently beating it in the 10 p.m. time slot with edgy narconovelas-soap operas about Mexican drug lords-aimed at a new generation of bilingual Latinos. Next month, Telemundo employees from six scattered offices will move into a new $250 million headquarters as the broadcaster gears up to air the 2018 FIFA World Cup for the first time, after decades of the soccer competition airing on Univision.
Meanwhile, Univision Communications Inc.’s finances have come under strain, and people close to Univision say one contributing factor has been the growth of Telemundo. Last week, Univision scratched plans for an initial public offering and announced Chief Executive Randy Falco would depart earlier than planned, at the end of this year. The company is also weighing cost cuts. 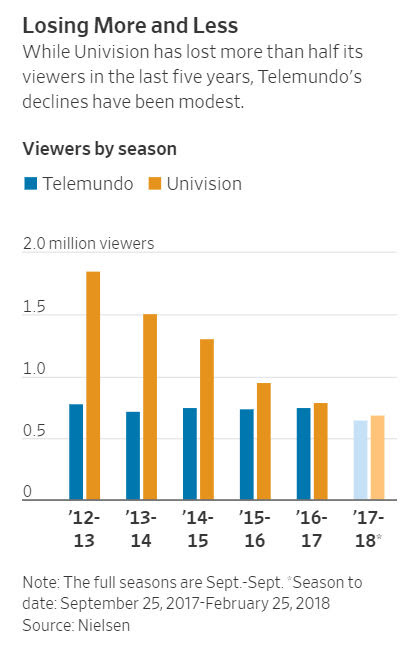 Hispanic media haven’t been spared the ratings declines that competition from streaming services has brought to the entire television industry. But Telemundo, backed by the firepower of its corporate parent, has seized on shifting preferences among the U.S. Hispanic population to claim market share from its closest competitor.
«Hispanic media today is no longer about habit. It’s about choice,» said Cesar Conde, chairman of NBCUniversal International Group and NBCUniversal Telemundo Enterprises, units of Comcast. Mr. Conde, a 44-year-old Harvard graduate of Peruvian-Cuban descent who Comcast hired from Univision in 2013, is himself a picture of the viewer that Telemundo is targeting-young, ambitious and fluent in both Spanish and English.
Comcast began heavily investing in Telemundo soon after it acquired the broadcaster through its 2011 purchase of NBCUniversal, snapping up Spanish-language World Cup rights for 2018 and 2022 for $600 million. It also helped Telemundo spend more on pricier productions-filming scenes outdoors, blowing up cars and throwing people off bridges-to appeal to viewers just as likely to watch «The Walking Dead» as Spanish TV.
«We at NBCU and Comcast have put our money where our mouth is because we believe there’s a tremendous opportunity,» Mr. Conde said. 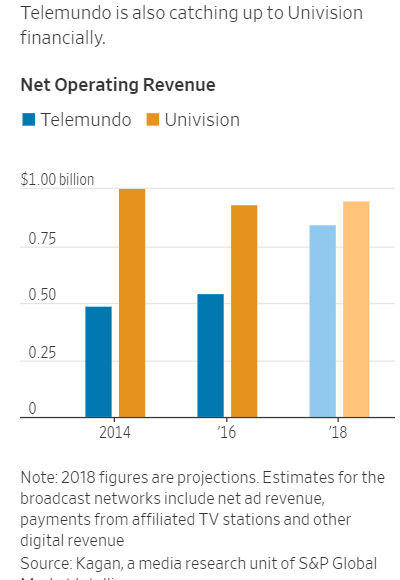 The investment is paying off. The Telemundo network is on track to nearly double its net operating revenue since 2014 to $844 million this year, according to estimates from Kagan, a media research group within S&P Global Market Intelligence. During the same period, Univision’s dropped 6% to $949 million, according to Kagan.
Comcast doesn’t break out Telemundo’s financials. Univision says its media networks, which include the broadcast network and other properties, had $2.75 billion in revenue last year.
The ratings gap between the networks has narrowed considerably over the past five years, largely because Univision lost more than half its prime-time audience in the key 18 to 49 demographic, while Telemundo retained most of its viewers. For the yearlong television season ended in September, Telemundo averaged 751,000 viewers, compared with Univision’s 789,000, according to Nielsen data.
As Latino immigration has slowed over the last decade-especially from Mexico, where the flow has actually reversed-the American Hispanic population has become increasingly dominated by Hispanics born in the U.S., who easily toggle between cultures.
In response, Telemundo has made its shows look more like English-language TV, with shorter, recurring series on themes that were ripped from the headlines and largely produced in the U.S. Univision’s telenovelas, which are produced by Mexican TV giant Grupo Televisa SAB, have tended to feature more fairy-tale themes.
«Telemundo has developed a more dynamic content that is more attuned with U.S.-based Latinos than is the case with Univision content, which has been more traditional, with an emphasis on the values of traditional Mexico,» said Federico Subervi, a Latino media consultant.
While Comcast’s backing has strengthened Telemundo, Univision’s private-equity owners have been searching for an exit and paying down debt left over from an ill-timed leveraged buyout more than a decade ago.
Univision notes that it has launched new cable channels, which helped the company capture a 67% share of Spanish-language prime-time viewing among adults 18 to 49 across its portfolio of networks during the February «sweeps» period.
The broadcaster has also been modernizing its content, making shorter series and launching its first pilot season this year in an effort to boost quality. It has had success lately with what it calls «inspirational series» at 8 p.m., including a string of biblical miniseries, and lighthearted telenovelas at 9 p.m. Those moves have helped it slow ratings declines and widen its prime-time lead over Telemundo in the 18 to 49 demographic this season.
«At the end of the day, audiences just need to feel good, and that’s what we are here to do,» said Jessica Rodriguez, president and chief operating officer of the Univision Networks division.