NiLPnote: Word spread widely in the Latino community yesterday that the United States Hispanic Chamber of Commerce board had stripped its controversial President, Javier Palomarez, from office. As the New York Times reports today, he is being charged with financial irregularities and sexual harassment, opening up the organization to lawsuits. Palomarez also ran into problems within the broader Latino community for his attempts to curry favor with the Trump Administration, serving for a time, some said fictionally, as a member of Trump’s so-called Diversity Council. He is the second leader of a major Latino national organization, along with the President of LULAC, Roger C. Rocha, to run into trouble for showing support for Trump.
The USHCC is currently under the leadership of its former Vice President, Eliza Hernandez, who now serves as the organization’s Chief of Staff. Efforts by NiLP to reach Ms. Hernandez for comment yesterday were not retuned after a number of phone call and email approaches. She can be reached atehernandez@ushcc.com.
—Angelo Falcón
Leader of Latino Business Group
Steps Down Amid
Sexual Harassment Claims
Javier Palomarez, chief of the U.S.
Hispanic Chamber of Commerce, has
denied claims of sexual harassment
and financial impropriety.
By Kate Kelly
New York Times (February 12, 2018) 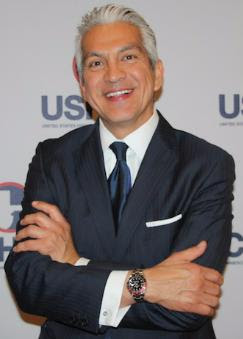 The head of a prominent Latino business organization is leaving his job amid allegations of financial impropriety and sexual harassment.
Late Monday, directors of the United States Hispanic Chamber of Commerce announced that the group’s president and chief executive, Javier Palomarez, would step aside.
«After much deliberation and careful consideration for the future of the USHCC,» the board said, «Mr. Palomarez and the board of directors have mutually agreed to undergo a leadership transition for the organization effective immediately.»
The board made no mention of the allegations that have enveloped its chief executive, saying only that it was committed to «dignity, respect, and a careful stewardship of its financial resources.» The departure follows the board’s announcement on Friday that it had hired an outside law firm to investigate «various allegations,» but did not offer details or specify who was the subject of the claims.
As part of the statement on Monday, Mr. Palomarez said he was «extremely proud» of his tenure at the chamber, which calls itself the voice of 4.4 million Hispanic-owned businesses.
Mr. Palomarez, who has run the organization for close to a decade, was accused by a longtime board member last fall of paying himself hundreds of thousands of dollars more than he was entitled to under his contract, according to minutes from the board’s charitable foundation and a Texas court filing.
In the Texas filing, Mr. Palomarez denied any financial impropriety. He said in a statement Friday that the claims against him sprang from a «retaliatory effort» by Nina Vaca, the board member who flagged them first. Ms. Vaca declined to comment.
Mr. Palomarez was also accused of sexually harassing his former chief of staff, Gissel Gazek Nicholas. In an interview with The New York Times, Ms. Nicholas said that at the end of a group meeting in a Chicago hotel suite in 2013, he asked her to stay behind after the others left, then asked if she had ever thought about «being» with him and tried to kiss her. Her account was corroborated by an email she sent to a friend within hours of the incident and another friend in whom she confided afterward.
A lawyer for Ms. Nicholas, who was fired from her job last November after eight years at the organization, has threatened to sue both Mr. Palomarez and the organization for sexual assault, sexual harassment, creating a hostile work environment and retaliation.
In his statement Friday, Mr. Palomarez said, «I categorically deny these deeply troubling allegations.»