Latino Leaders on Trump’s First State of the Union Address

NiLP Latino Leadership Survey
Latino Leaders on
Trump’s First
State of the Union Address
By Angelo Falcón
The NiLP Report (February 5, 2018)
As part of the nonpartisan National Institute for Latino Policy’s tracking of Latino leadership views of the Trump Administration, we conducted a survey of their opinions on President Trumps’ first State of the Union address he presented on January 30, 2018. This online survey was conducted on January 31-February 3, 2-18 with 194 respondents, based primarily on the nonpartisan email, Facebook, Twitter and LinkedIn listserves of NiLP. This is not based on a probability sample and its findings are only suggestive, meant to promote discussion of the issues involved within the Latino community. Despite its non-scientific nature, this is the only leadership opinion survey conducted nationally among Latinos.
The first such survey NiLP conducted in March 2017 after Trump took office revealed an overwhelmingly negative view of President Trump’s policies as they affected the Latino community. Using this as a baseline, the current survey results indicate that Latino leadership animosity toward Trump’s policies has remained consistently high.
As a collection of the views of Latino leaders nationally from a wide range of sectors, it captures the sense of this important set of Latino opinion leaders about the Trump Administration. This leadership startum is the one that sets the framework for assessing Latinos issues and priorities but it is never surveyed on their opinions as a distinct group in the way this NiLP Leadership Survey does.
Because it is not possible to accurately weigh the national-origin data of this Latino leadership segment, the approach we use is to report the findings by national-origin: Mexican, Puerto Rican and Other Latino opinion leaders. As you assess these findings please note that Mexicans represent the overwhelming majority of the Latino population, followed by the Other Latinos as a group, and Puerto Ricans.
It should be noted that Puerto Ricans are the only group that migrates to the United States already as US citizens. The Mexicans includes many new immigrants as well as a large number of US residents going back many generations. The Other Latino category includes a wide range of Central and South Americans and includes Dominicans, these are groups that have a shorter presence in the United States and large numbers of undocumented immigrants. What is interesting is that this survey reveals united views across all three Latino opinion leaders in their negative assessment of the Trump policies.
Overall Reaction to the State of the Union Address
Overall, large majorities of the three groups of Latino opinion leaders (63-66 percent) rated Trump’s State of the Union speech as «poor.» 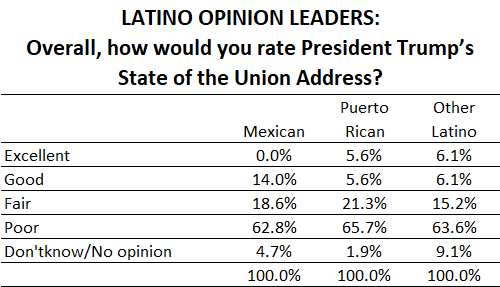 As to how they felt about his speech, even larger majorities of the Latino opinion leaders (66-77 percent) felt «very negative.» 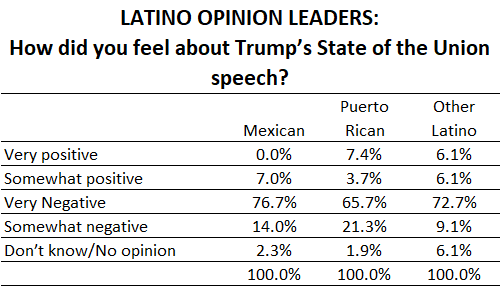 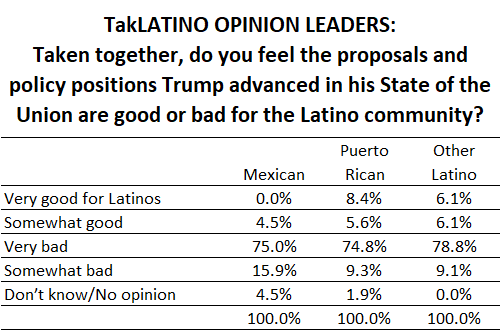 Reactions to Trump’s Claims of Accomplishments
On the claims Trump made during the SOTU speech, the Latino opinion leaders strongly dosagreed with all, but were most in agreement with his infrastructure framework (27-38 percent were in agreement).
On Trump’s claim that he is responsible for the growth of the American economy, large majorities of the Latino opinion leaders disagreed (76-88 percent). 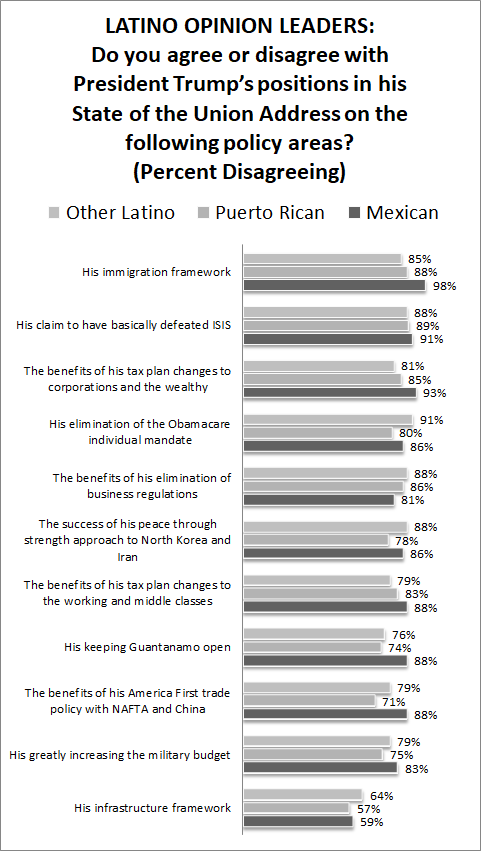 Reactions to Trump’s Immigration Framework
On his immigration framework, while there was support among the Latino opinion leaders on his proposed extension of DACA (82-85 percent were in agreement), there was strong disagreement with the other legs of the framework he proposed, especially the building of the Mexican wall (86-93 percent disagreed). 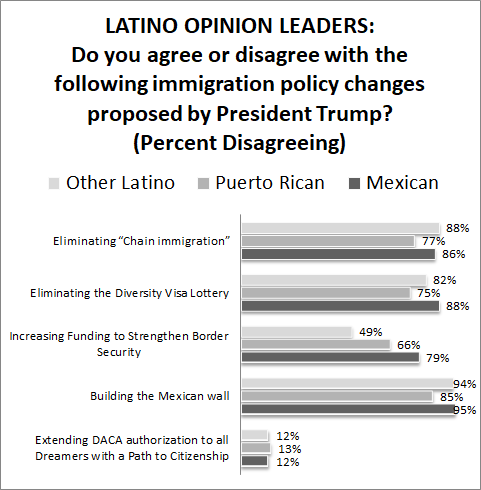 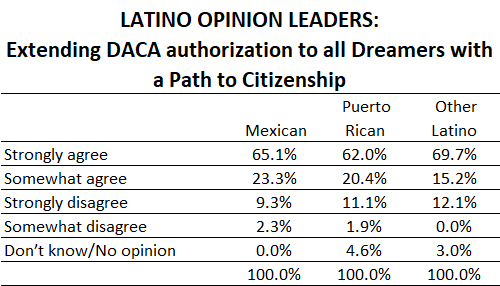 Did Speech Promote Bipartisanship and Unity?
Two goals of Trump’s State of the Union speech were to promote bipartisan agreement on his policies and to set a tone to unify the country. All three groups of Latino opinion leaders overwhelming felt that Trump failed on both counts. On bipartisanship, 88-93 percent disagreed; on delivering a unifying message, 88-96 percent disagreed. 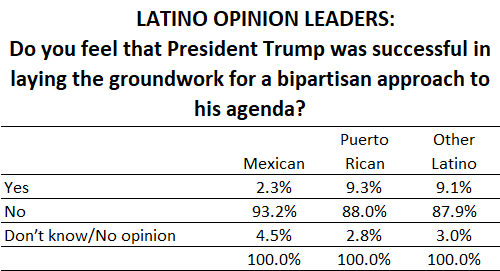 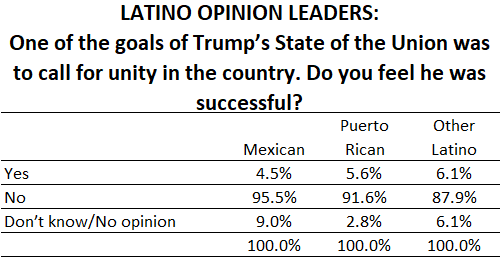 Trump and Russia?
One of the major issues President Trump did not discuss in his State of the Union address was the Mueller investigation into Russian meddling in American politics. Asked if they thought Trump had colluded with the Russian government, majorities of all three groups of Latino opinion leaders thought he did, ranging from 55 percent of the Other Latino opinion leaders to 77 percent of the Mexicans. 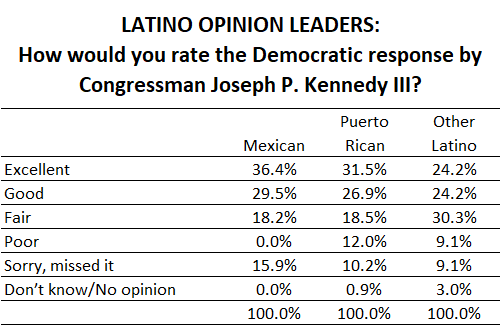 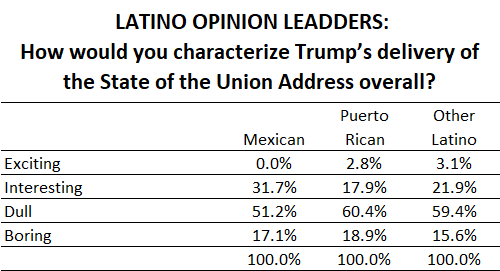